The image sharing site Pinterest, has become second only to Facebook in terms of importance for referral links. In the first quarter of 2014, Pinterest drove 48.36% more traffic than it did at the end of 2013!

This fact was revealed in the “1st Quarter 2014 edition of the Shareaholic Social Media Traffic Report”, published on April 21, 2014.

Shareaholic, (maker of “share” buttons) collated data from over 300,000 blogs, publisher and e.commerce sites, which receive over 400 million unique visitors each month.

Over the four month period to March 2014, Pinterest’s share of traffic grew to 7.1%, which is greater than the total figures for each of the six remaining social networks (Twitter, StumbleUpon, Reddit, YouTube, Google+ and LinkedIn).

In this chart, the month columns show the percentage of overall traffic that sites received from each network, and the change lists how much each social network’s share of visits gained or declined. 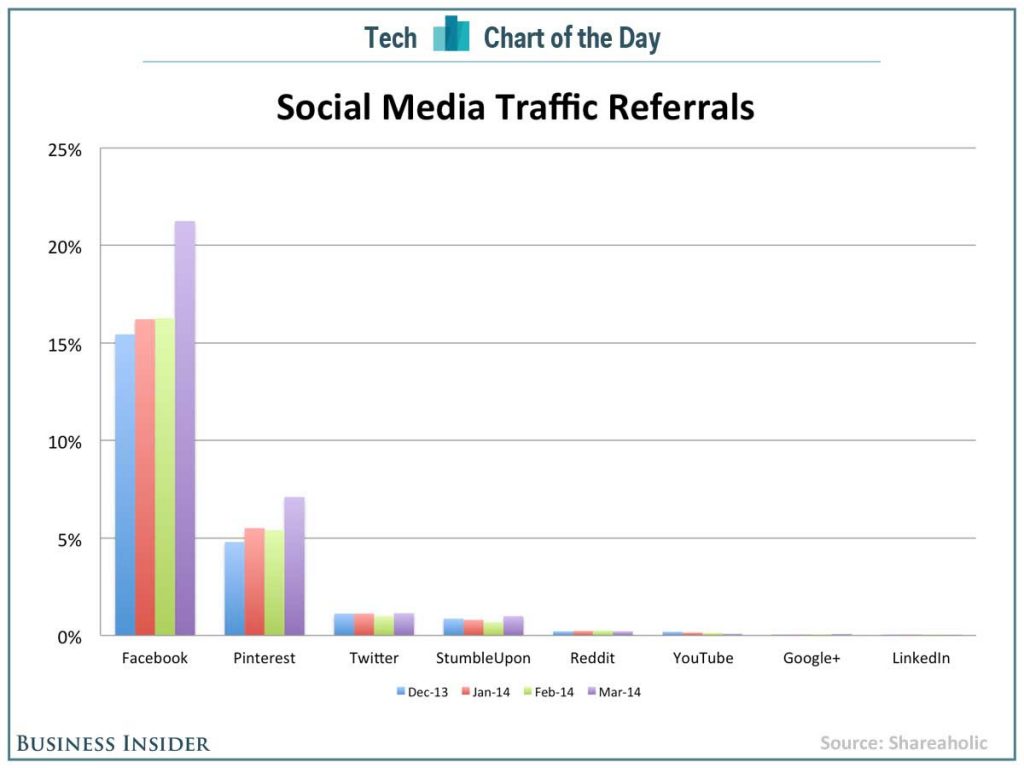 Pinterest has grown dramatically since its launch in March 2010, and in October 2013 was valued at US $3.8 billion. Worldwide, over 70 million curators now satisfy an innate human desire to collect, by pinning images, text and videos to topic-specific ‘boards’, for no cost but their time.

The ability to easily search, source and pin items of interest, has assumed the scale of an addiction, as some self-referential images attest. In one, a father says to his children: “I am about to introduce you to Pinterest. But first, take a moment to say goodbye to your family and friends”!

Brands looking to promote a product, are recognising the value of building boards by and for enthusiastic Pinners, who are focused on their particular product; whether it is avocado dip, timber floorboards or diamond engagement rings. Currently, about half a million brands have Pinterest accounts.

Women reportedly comprise a substantial proportion of Pinners (80%), and in the US, are likely to have on average, 67 followers each. This constitutes a massive digital ‘village square’ where personal referrals are exchanged.

Referral links are only a portion of website traffic, (comprised of direct traffic, social referrals, organic search, paid search, and more). However, they are often valued highly, as they are the product of individual advocates using social media to generate positive messages to global networks.

Many brands are attempting to drive traffic on the web, by posting content to multiple social sharing sites, such as Facebook and Twitter, without necessarily being aware of the comparative impact or benefit.

Piqora, visual, interest-based network marketing & analytics specialist, states that on average, the value of a pin is USD 0.78 in sales.

Brands wanting to engage with their markets need a social media strategy.

Digital Tsunami can help you plan yours.

I happily recommend Andrew and the Digital Tsunami team.

I have dealt with many web marketing and support companies over the years, and have been very impressed with Digital Tsunami's response, advice and understanding of their field. I recommend talking to Andrew about your next web project.

We have been fortunate to work with Andrew and his creative team from the inception of our business. The design and execution of our site has been fundamental in winning over clients and establishing our footprint in a very crowded space. We also place great value on their input into our business process.

Working with this team has been a delight and the resulting website far exceeds our expectations. All stages of the process were handled professionally, promptly and creatively. Discussions went smoothly, with flawless communication and suitable and sensible solutions whenever issues were raised. Time frames were either met or delivered early. The site was 100% accurate, indicating impressive attention to detail.

Without exception, the feedback on our site has been outstanding - clear and thoughtful layout, appropriate and interesting graphics and intuitive navigation.

Aimee An Duffy
Chantrepreneur
Gwynedd, Wales
Testimonials
error: We appreciate that you value our content. You are welcome to link to this page, but content is copyright protected.