Most people acknowledge that advertising can often, at some level, be equated with deception.

In text, it may be the clear, concise statement of positives and avoidance of negative inference. In images, it may be the casting of an actor, or at very least, a person with slightly better than average skintone. These are accepted sins of omission rather than commission, and what advertiser would ever promote a negative?

A David Ogilvie print ad did mention an absence .. of road noise, when claiming that in a Rolls Royce, “At 60 mph, the loudest sound you hear is the ticking of the clock”.

Most criticism of deception in advertising is levelled at those who either make extreme claims for their products or services, or simply fabricate them.

As someone who has been making films and television commercials for over 30 years, I understand the pragmatism and pressures placed on creatives and clients to produce positive messages. I’ve also met people whose creative tendencies were nowhere more clearly expressed than in their CVs! 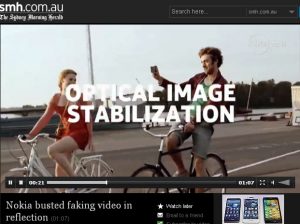 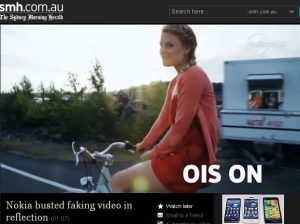 Recently Nokia launched their Lumia 920 smartphone with a commercial purporting to demonstrate Optical Image Stabilization (OIS), which reduces the bumps and judders of a handheld phone camera.

The video shows two cyclists freewheeling along, as one captures video of the other on a Lumia 920.

However, when the camera’s point of view was seen, alert viewers noticed a reflection which exposed a video cameraman travelling beside the bicycle, in a van. This presumably resulted in rather more image stabilisation than a smartphone held by an actor on a bicycle.

Nokia quickly backpedalled, stating that the TVC had been intended as an OIS ‘simulation’ only. A cynical person might think the whole exercise was for increased publicity. Yet it became an exercise not in image stabilisation, but brand image destabilisation, generated by a lack of attention, worse PR and the power of social networks. The brand was tarnished by a mobile mob fueled with righteous indignation and the ability to extend to millions of consumers from a single Tweet.

I am less surprised by the fakery of the shot, than that it took an amateur to detect it. Most veteran producers, directors and editors would have noticed the reflection, even if it was a single frame, without even slowing the video. Most agency creatives would have noticed it in playback. Most cameramen would have prepared for it during the reheasal. The angle of the camera would have been more oblique, the script changed or the frame retouched in ‘post’.

As with many visual deceptions, the perception of the viewer (and in this case, the participants), is distracted. Today’s disruptive technology makes deception both significantly easier to achieve and criticism considerably easier to spread. Companies which want to protect and positively project their brands, need to be more honest, more transparent and far more vigilant than their sceptical audience.

There are examples of advertising addressing this issue and capitalising on it with memorable effect. I remember a billboard, vertically split into 2 panels, each with a photograph of a couple. On the left, a rather ordinary, anemic, slightly overweight couple, posing uncomfortably. The creatives had tongue firmly in cheek when they wrote the copy, promoting a product which could radically transform lives. On the right, a young, buffed, wealthy black couple confidently gazed at the camera.

An asterisk preceded the disclaimer: “Results may vary”.

.. accurately interpreted the project brief and the outcome was a piece of cost effective quality work.

The launch .. was a success. We were able to present this live on a Wireless connection during our Sydney, Australia sales conference on a location with very limited internet bandwidth. This proves the technology used .. renders light webpages which are easy to download on a browser.

Comments I've heard from our employees were all positive and reflected precisely what we were looking for: a simple but concise, clean and effective webpage.

We acknowledge the timeframe given to you was extremely short but nevertheless you have sucessfully delivered the project on schedule .. the critical success factor was communication and availability of Digital Tsunami's team.

I am very glad we were able to partner with such a professional team as yours and I am confident any other initiatives with you will be as successful.

.. organised, meticulously detailed and yet flexible - always serving client needs to the highest standards. From a client perspective, you can expect high quality, timely completion and minimal fuss.

We continue to be impressed by the standard of service and advice. We not only get quality web design and implementation, but also honest feedback and suggestions which are crucial to the final product.