Over the 12 months to 2013, time spent watching video on mobile devices has doubled.

In the first 3 months of 2013, the market share of video viewed on handheld devices grew by 19 percent.

In a 24 hour period on 7 June, tweets with links to Vine, exceeded those to Instagram. Within 2 weeks, they doubled!

Digital Tsunami has proclaimed 2013 the Year of Video, Mobile and Social.

Here are the latest statistics which demonstrate massive growth in these 3 marketing platforms.

Tablets have passed smartphones as the most popular device for viewing video. A chart from Silicon Alley Insider shows that in January, tablets oustripped mobile as a video platform. 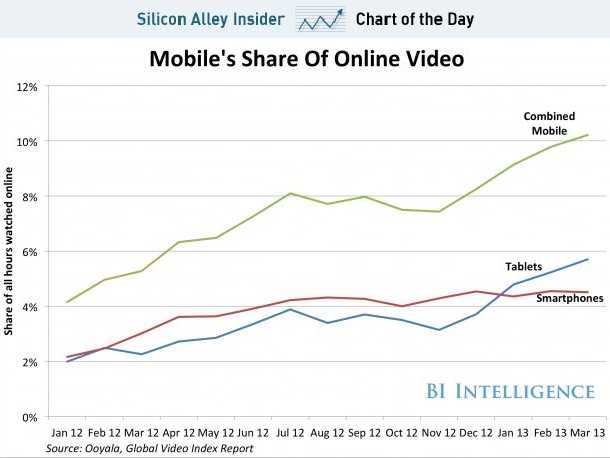 Mobile and tablet video now comprise more than 10 percent of all online video views. In Business Insider of 20 June, Steve Kovach states, “In the past year alone, video-watching on mobile devices has doubled.”

The statistic was extracted from Ooyala’s Q1 2013 Global Video Index. After doubling in 2012, the share of tablet and mobile video increased by 19 percent in the first quarter. At this rate of expansion, it is on track to double again in 2013.

The data sample used in this report covers the first quarter of 2013. All video data was collated from an anonymous cross-section of Ooyala’s global customer and partner database, anonymized and in real time.

The completion rate (at which viewers watch a portion or all of a video), demonstrates a direct inverse relationship with duration. The shorter the video, the more people watch it all.

Reinforcing this statistic is the recent revelation that Vine has passed Instagram in the total number of tweet links. In Marketing Land, Matt McGee wrote “Still not sure about the idea of making and sharing six-second looping videos? .. on Friday there were more Vines shared on Twitter than Instagram photos.”

Instagram, the online photo-sharing and social networking service that was launched on October 2010, has become a global hit, and 18 months later, was acquired by Facebook for approximately $1 billion in cash and stock.

Founded by Twitter, the six-second looped video platform Vine, launched in January 2013. So in just 5 months, the ‘established’ platform Instagram, with over a hundred million users worldwide, has been surpassed in social links by the 5 month old Vine!

Topsy Analytics calculated 2.37 million links to vine.co on Twitter compared to 2.14 million links to instagram.com, over the same 24-hour period. It was only on June 3, that the Android app was launched. The preponderance of Android smartphones across Asia may have contributed to this growth. Vine has become an immediate hit on Android. Within the 2 weeks since, tweets have doubled (as at 09:00 on 19 Jun), with 1,144,187 tweets linking to Instagram, compared with 2,308,317 tweets linking to Vine.

Any doubts over whether people would want to make or watch videos limited to six seconds have been allayed. Brands are increasingly adopting Vine, including Samsung and Target. Vine is perfectly suited to concise animations of all types, but has clearly prompted creativity.

While at Essential Asia in 1993, Morse produced and directed television commercials in the style of a computer game, for US food brand Tootsie Roll. He states “We developed a licensed character based on the fruit gummy product, an environment with challenges and rewards which emphasised the nutritional benefits of the product, then used fast moving ‘2 and a half D’ cel animation, with integrated sound effects consistent with those of a computer game.” The spot was produced in multiple languages for terrestrial and satellite broadcast across Asia.

With the expertise to produce a global video or a six-second ‘blipvert’, Digital Tsunami enables you to maximise the exceptional ROI of online video.

To promote your brand effectively with social, mobile and video, across all languages, geographic regions and platforms, contact Digital Tsunami today.

.. a reliable and steadfast operator, with a keen sense of service. Innovative and contemporary, and operating within the upper echelon.

I recently engaged Digital Tsunami to design and build my 60-page website. I'm a website copywriter who relies heavily on web-generated business, so my own online presence needs to be impeccable.

The solution that Digital Tsunami supplied is brilliant. It meets my needs perfectly; it's clean, bold, elegant, fast, and easy to edit. I've had lots of very positive feedback about it, and since launch, my request for quote rate and conversion rate have increased markedly.

The team at Digital Tsunami was incredibly responsive, delivering a solution well ahead of deadline. Their technical knowledge was exceptional, they were innovative, and they were very meticulous. What's more, they understood my business and technical requirements and translated them into a user-friendly, refined, professional site which is conceptually simple and cohesive.

I have no hesitation in recommending the website design services of Digital Tsunami to any business .. that needs a stand-out online presence.

I happily recommend Andrew and the Digital Tsunami team.

I have dealt with many web marketing and support companies over the years, and have been very impressed with Digital Tsunami's response, advice and understanding of their field. I recommend talking to Andrew about your next web project.

For providing a reliable, fast, and well maintained hosting service for business websites, I recommend Andrew and his company Digital Tsunami. The technical support given has been above and beyond, their hosting the fastest I have experienced, and is very well maintained with no issues.

Andrew certainly bends over backwards for his new and current clients, and I can tell he genuinely cares about providing nothing short of an outstanding service.

Adam Connell
Marketing Executive
Adelaide, SA< Australia
Korvest (ASX:KOV)
Testimonials
error: We appreciate that you value our content. You are welcome to link to this page, but content is copyright protected.